ESPN and "Bubba" Wallace Signal the End of NASCAR 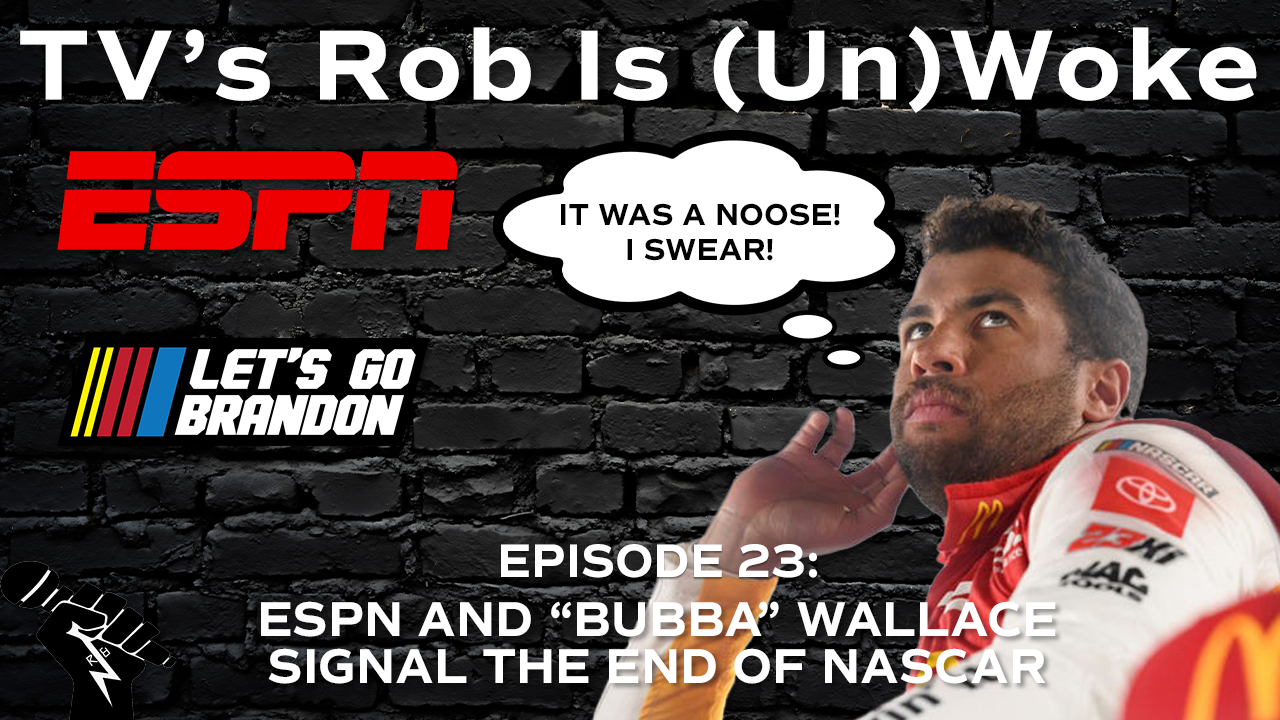 Darrell Wallace Jr. AKA Bubba and ESPN have now officially signaled the end of NASCAR.  And NASCAR itself, through the actions of current leadership, including NASCAR President Steve Phelps, has officially splintered and alienated its fan base.

All it took was a “documentary” film.  The last bastion of sports that had for the longest time been tucked away from the Woke political mob, has now been ruined.

ESPN is literal garbage. There is a reason that over the past decade, ESPN has continued to plummet in the ratings.

It's not because people are just all of a sudden not interested.

That's what they've done. You can't deny those facts. We're rewinding the clock back to another hate crime hoax with Bubba Wallace.

Now I might call him Boobba Smollett because it's kind of honestly, very true.

Now, they wanted you to know that E :60 is Award Winning, they tell you as much going into and coming out of every break … I guess by constantly reminding you that it’s award winning, that means that this is credible and you must believe everything that is said during course of the program.

Here's an outline of what this award winning show had on this episode:

Episode opens up with a story from 2011, involving road rage where he's the good guy because he could have been another George Floyd. He acted a fool with unmarked police. Cop asked him about his car, asking if he could afford it. So the cop is racist, because he saw a young black guy in an expensive car and asked if he could afford it. Sorry, it's not because you're black, it's because you're young. He was 18 at the time.

Then cuts to the open, and it features Rage Against the Machine. NASCAR people singing his praises.

Within 7 minutes, ESPN already alluded to the fake noose story of 2020.

He's an influencer, since he led the charge on getting NASCAR to ban the confederate flag.

We get to hear why he's called Bubba. Hear about his childhood. When he started racing. He's not sure if he loves racing, but he does it because it's fun.

Mother obviously sees life through the lens of color and race, because she would go to races and count black people.

Cousin was killed by a cop after a night of drinking. Bubba's mom makes it seem like it was racially motivated. Black people are murdered by police. Bubba still remembers the officer's name.

Being in racing is obviously dangerous for a black kid, because the white kids are racist. His WHITE father instilled a racist demeanor in his son. He won a lot of lower level races, and officials would "more closely" inspect his cars, thinking he was cheating.

In 2011 he wins at Richmond. Mom points out afterwards that the only black people there were them and the trash cleaning crew. So much racism.

2011, pulled over again for failing to signal, crossing state lines. Cop was a racist, asking him if he had anything illegal in his car. WHITE dad says he was pulled over because he was black. Mom had to black-splain to white dad.

All of this in the first 23 minutes.

Starts with Danville, Virginia … immediately points out how it was the last stronghold of the confederacy with a racist history of lynching and slavery. It's also home to NASCAR hall of famer Wendell Scott. The last black driver to win a NASCAR race. We get a history lesson on Jim Crow Era NASCAR racing. We learn how Wendell was screwed out his rightful win by a racist track operator.

We learn about the falling out Bubba had with his father.

Gets into a fistfight with him.

He doesn't know what happened between his parents.

Bubba's dad doesn't answer what caused the fallout. He's obviously a racist for not wanting to talk about it, otherwise they wouldn't have put that in there.

Bubba texted his dad about it, and didn't the response he was hoping for. More tears.

We get a look back to his Daytona 500 debut.

Father wasn't there, said it was tough, and it was a hard time.

He finishes second, trash talks Denny Hamiln in post race interview. Cries in media center. King praises him. Mom and fiancé were there. He gives momma a hug. Cries the whole time. Cuts back to present day interview, and Bubba cries again because daddy wasn't there.

We learn about Bubba's hobbies, like photography. He likes clouds.

Called 2020 a bald eagle flying over a dumpster fire in the rain with a rainbow.

Now we get to learn how the one Asian American driver is a racist for having the  N word in his vocabulary.

Now we get to see instances of black people being killed by white people, including George Floyd. Bubba now thinks white people can kill black people and get away with it - BLM protests/marches … they conveniently omit the riots. Now Bubba pushes for NASCAR to speak out. White drivers are hesitant to do so, Bubba decides to do it himself.

Steve Phelps, NASCAR president starts on the banning of the confederate flag

Jimmie Johnson shows how much of a beta male he is

Bubba has security for the first time … daddy was scared

Confederate flag flies over track as a sign of protest

Steve Phelps calls meeting with Bubba, says there was a hate crime committed at the track … Steve Phelps perpetrated the false noose narrative. Obviously a desperate attempt for headlines.

Phelps takes a strong stance, threatening to ban whoever did it.

"Silent" drivers stage a stand with Bubba campaign based on "what they learned" … they push his car to the front of the starting grid.

The King … NASCAR allows a team owner to break protocol to be there with his driver.

FBI releases their findings, Bubba was not the victim of a hate crime

Bubba says it's a noose, there you go

Booed at all-star race, made Bubba angry … you live your life, I'll live mine, way better than you

Mom says nothing will be simple for Bubba. Racist white people will always scrutinize him

So, thank you NASCAR, ESPN and Bubba Wallace for killing a sport built on a rebellious attitude … built by legends like the Pettys, the Earnhardts, the Jarretts, the Allisons and so many more.

Email has been submitted.